OFF! Red tape for a white boy… 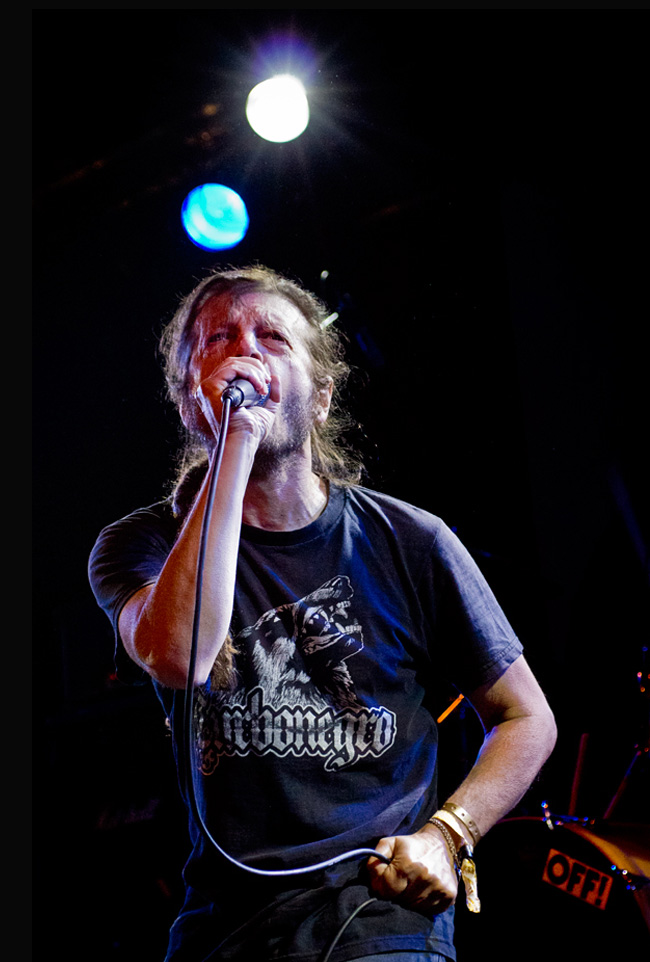 For Keith Morris punk rock is the present, even before the past. It would be easy to live off the primordial deeds of Black Flag and Circle Jerks, but the Californian rasta man has preferred to face a new challenge with the foundation of Off! And the end result is just inflammable material.

“I don’t want to be on the radio after Linkin Park and before Korn.”

The paternity of punk rock is attributed to several parents from both sides of the Atlantic Ocean: from The Kingsmen to The Who, from The Kinks to MC5, from The Sonics to The Small Faces and right up to The New York Dolls and Ramones.

Keith Morris – despite being part of the history of American punk/hardcore first with Black Flag and then with Circle Jerks – has no ambition to play the part of the godfather of the scene. “Some people called me ‘icon’ or ‘legend’, others believe I’m a rockstar, a tough, a jerk or an asshole; none of this is true, except for the jerk and asshole. Sometimes I have problems with the hardcore community who think that your path, your music and your image only belong to a limited circle. Where in theory you would expect freedom and openness, in practice you often come across elitism,” says the sarcastic 56 year old musician from Los Angeles.

Endangered dreadlocks, faded Ramones t-shirt, faded jeans, skate shoes: this is not the handbook uniform to please fans of Off!, the group with which Morris teaches a wonderful lesson of expressive urgency from 2010 (also thanks to illustrations by Raymond Pettibon, yesterday graphic artist to Black Flag and today visual artist of international fame). It is that he still lives punk at first hand: “We were recording the new Circle Jerks album when producer Dimitri Coats [leader, singer and guitarist of Burning Brides, Ed.] pointed out to me that there was a lack of direction and energy. He kept telling us the same thing that Rick Rubin told Metallica for Death Magnetic and is saying to Black Sabbath for their next studio work: ‘Go back to your roots’. He was right while other members believed that, for the simple fact of being Circle Jerks, people would accept everything, but I don’t want to be on the radio after Linkin Park and before Korn. So Dimitri and I met in my apartment listening to any music that inspired us – from Beethoven to Blue Öyster Cult – and we brainstormed on riffs, melodies and lyrics. The result, a handful of songs that had the same spirit of 1977-78. What happened next was that the other guys in the band fired Dimitri and I wasn’t going to look for any kind of rip-off situation. One day, in front of a burrito and some iced coffees, I told him: ‘This is the way forward: no rules, no restrictions!’.”

The paradox of Off! is that a band so ‘old school’ has been promoted with a very modern approach. 4 EPs released in 2011 are grouped under the First Four EPs album, with special mention for Black Flag’s The First Four Years. The quartet – Morris, Coats, bassist Steve Shane McDonald of Red Kross and drummer Mario Rubalcaba, former Rocket From The Crypt among others – made its live debut at the 2010 South By Southwest Music Festival, in Austin, then went live in America and Europe. 2012 was the year of the so-called long-distance debut: Off!, 16 minutes of vitriol to celebrate the decline of Western civilization. All sponsored by Vice Records – record label of the Canadian/New York magazine Vice – and supported by an effective online campaign.

Moreover, since the summer of 2011, one Anthony Kiedis has not taken off his ‘Off!’ cap. “Anthony is the lead singer of Red Hot Chili Peppers, but above all a dear friend and a member of our scene since the early 80s,” says Morris. “What should we do? Stop him wearing our hats? Many kids have bought it without even knowing who we are, but I don’t give a damn. Just as we had no hesitation in taking advantage of Facebook to get ourselves known. According to some purists we should have printed flyers and pasted them around the cities or got on the phone and invited friends to our shows, focusing on word of mouth. The truth is that if we had not taken advantage of the Web, we would have been fucking idiots!” 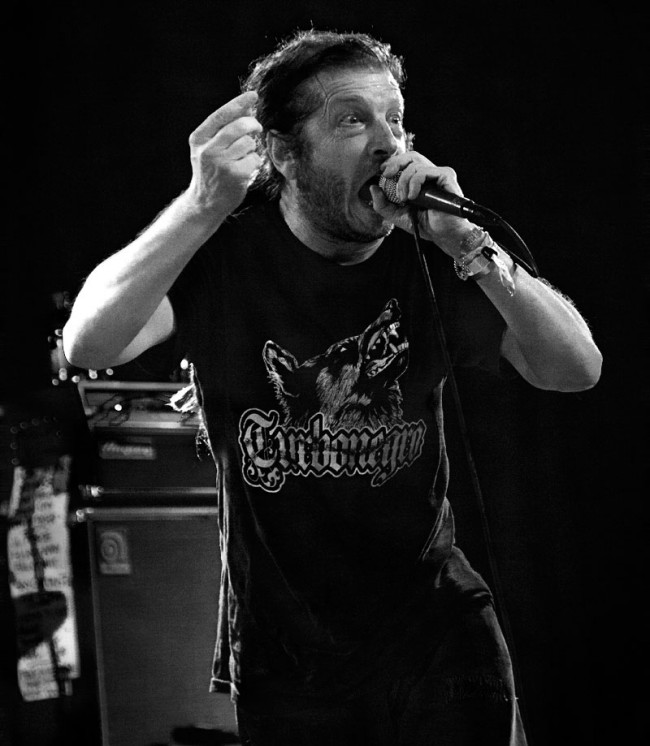 The story of L.A. punk rock and its surroundings is awash with formidable bands (X, The Germs, Social Distortion, The Adolescents, The Gun Club, etc. apart from, obviously, Black Flag and Circle Jerks) and memorable characters (Exene Cervenka, Mike Ness, Darby Crash and Jeffrey Lee Pierce, among others). Today there are numerous books, films and documentaries that tell the story, but for a long time the value of this musical and cultural scene was crushed by the shadow of New York with the various Television, Talking Heads, Blondie and Patti Smith. “For the New York bands it was easier to go to London, ending up on the cover of NME and making your way in Europe,” says Morris. “A few hours in the air were enough and they were already backed by record deals from major labels with economic and promotional support. We in California and in the West Coast were on the other side of the U.S. and recorded for small independent labels. The only way for us to advertise was to get in the van, go to play for 20 punters in Oklahoma and any other state in the country and be away from home for 3 or 4 months in a row. It was the same thing for bands in Washington, D.C. The best book to learn about our adventures is We Got The Neutron Bomb: The Untold Story Of LA Punk by Marc Spitz and Brendan Mullen [Mullen, who died in 2009, was the Scottish music journalist who moved to the U.S. and founded the The Masque, Hollywood punk’s historic local, and became a personal friend of the Red Hot Chili Peppers who, on 2011’s I’m With You, dedicated the song Brendan’s Death Song to him, Ed.].”

Was there really something special in the air of the City of Angels at the time, according to Keith Morris? “On one side stood the smog, the Republicans, the glamour of Beverly Hills, cosmetic surgery, liposuction, red wine, cocaine and the jet-set: in practice, the metropolis of Less Than Zero [the debut novel of the American writer Bret Easton Ellis in 1985, Ed.]. On the other there were the ordinary people who led an ordinary life. We did not want to be part of one team or the other, and punk was primarily a form of rebellion against authority figures. Skate, surf, fast cars, weed and rock: we grew up in that environment, and when it was time to play we had to do it with the maximum intensity. The kids could only react by practicing skunk, slam dance and stage diving.”

The quintessential face of Black Flag was and always will be Henry Rollins: Spray Paint The Walls – The Story Of Black Flag – the biography of the band written by Stevie Chick and published in 2009 – on its cover has a picture of the Washington, D.C. singer without even having an original contribution by him inside. However Keith Morris remains a charismatic and unforgettable figure for many fans. In 1977 he was the first frontman of the band founded by guitarist Greg Ginn. In 1978 he was the first to interpret the timeless anthem Nervous Breakdown with a nasal and arrogant voice à la Johnny Rotten (Sex Pistols) in the EP of the same name. In 1979 he was finally to leave slamming the door. And like Rollins, over the years his personal relationship with Ginn has never recovered. 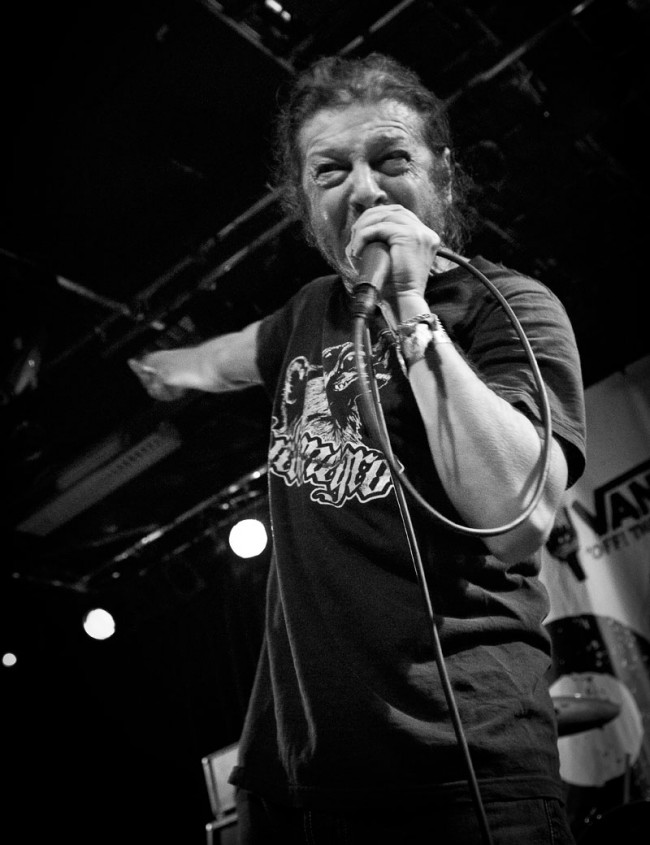 “I left Black Flag because I am an idiot”, declared Morris in May 2012 on The Blairing Out, the Web TV show of American journalist Eric Blair. “I found myself constantly being the excuse for the lack of progress in the band. They had started to become very workmanlike. We were rehearsing every night for minimum 3 hours, Monday to Sunday; for me there were other things to do besides just being in the band. Being the guy that everybody blamed for doing too much cocaine, being an alcoholic and an idiot, all of a sudden we were arguing and there were all these confrontations and verbal abuses. I just got tired of it and I wasn’t having fun. And if you are in a band and you are not having fun, you better be making a lot of money because otherwise it is just not worthy.”

Keith Morris hung out with John Belushi and he survived Black Flag, Circle Jerks (whose future at the moment is once again uncertain), use and abuse of various substances and even diabetes with which he was diagnosed in 1999. Ask him what have been the highlights of his career and he will tell you about that time on the telephone he deterred a fan and would-be suicide from going through with his intention. And about the time in the middle of the 90s that Circle Jerks jammed with Chuck Berry: “We were on tour promoting our last record [1995’s Oddities, Abnormalities And Curiosities, Ed.] and we were performing at a cool club called Mississippi Nights in St. Louis, on the bank of the Mississippi River. We were jamming and the punker dunkers were jumping around and having a good time,” declared Morris to Eric Blair. “All of a sudden there’s a break between songs, a guy comes up to the front of the stage and one of the bouncers grabs our roadie and says: ‘You need to talk to this guy, something’s happening here’. The roadie comes back and says: ‘That guy right there, that’s Chuck Berry and he wants to come up and play with you’. Of course in a situation like that, how do you not say yes? Our guitar player Greg Hetson worships the feet of Angus Young and AC/DC and Angus Young worships the altar of Chuck Berry. Without him you would have no Keith Richards, no Johnny Thunders, no Joe Perry; even a lot of The Beatles riffs are based on Chuck Berry, even The Beach Boys played a couple of covers of him, yes, and The Germs covered Around And Around. He was a regular member of the club, had his restaurant down the street and was always in the neighbourhood, and so here’s Chuck Berry ready to go in 5 minutes. The guys just start playing, he starts jumping around, the kids are going apeshit and I’m in awe. I mean, this is one of my musical heroes, one of the first records that I’ve ever bought was Chuck Berry’s Golden Decade and that record didn’t leave my turntable for two months… Later on the owner of the club comes up to me and says: ‘Chuck Berry told me before he left that you were one of the greatest rock band that he has ever seen’. To have a compliment like that from a guy of his stature, that’s better than when Joe Strummer came up to me and said: ‘I really appreciate your body of work’. As much as I love Joe and The Clash, to have Chuck Berry makes the comment that he made, I was floored.”

Collapse ‘Arms And The Covenant’ 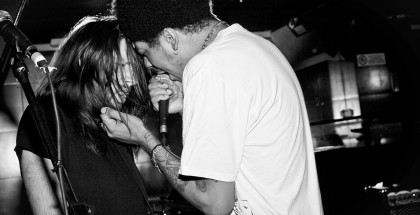 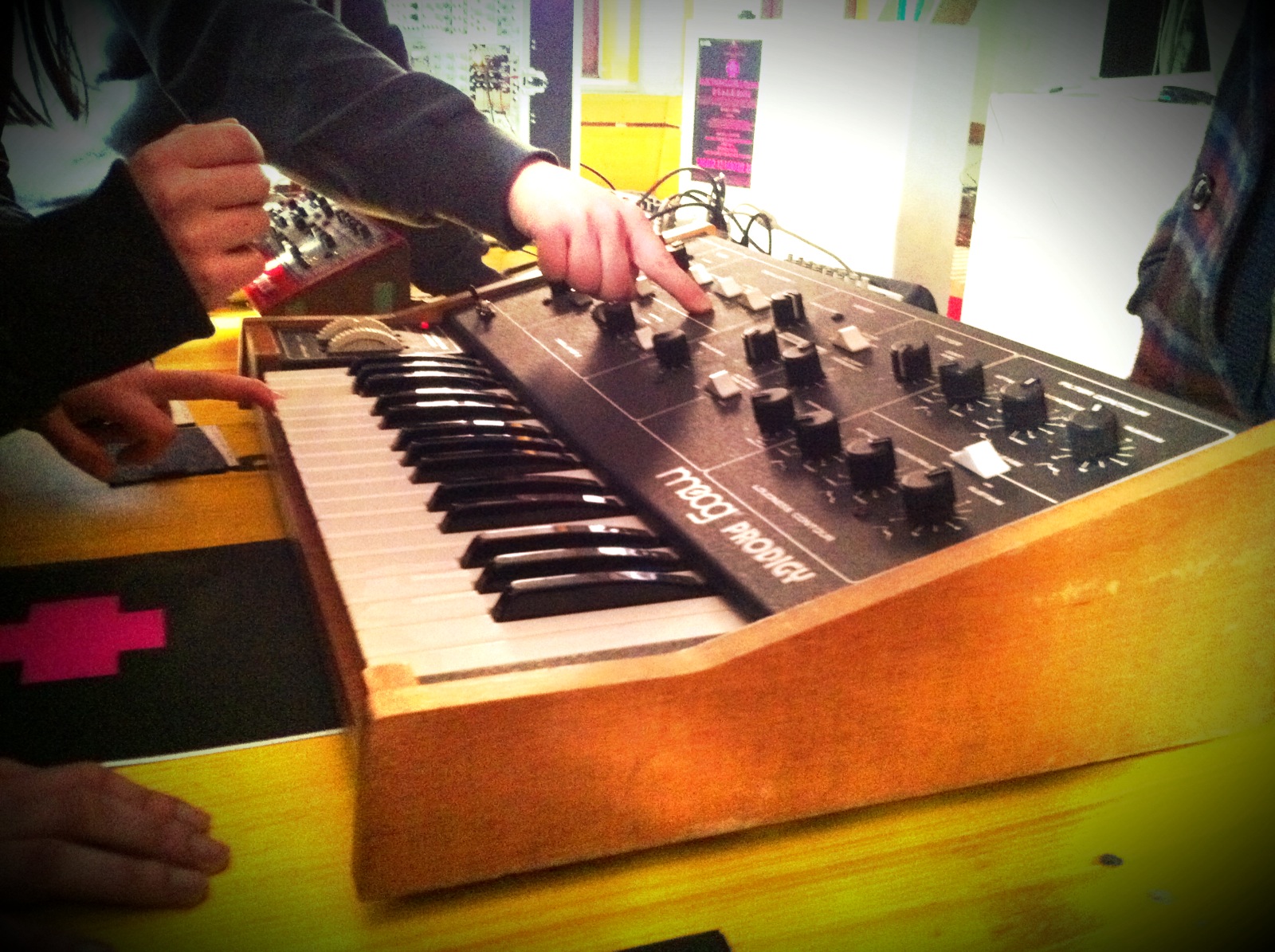 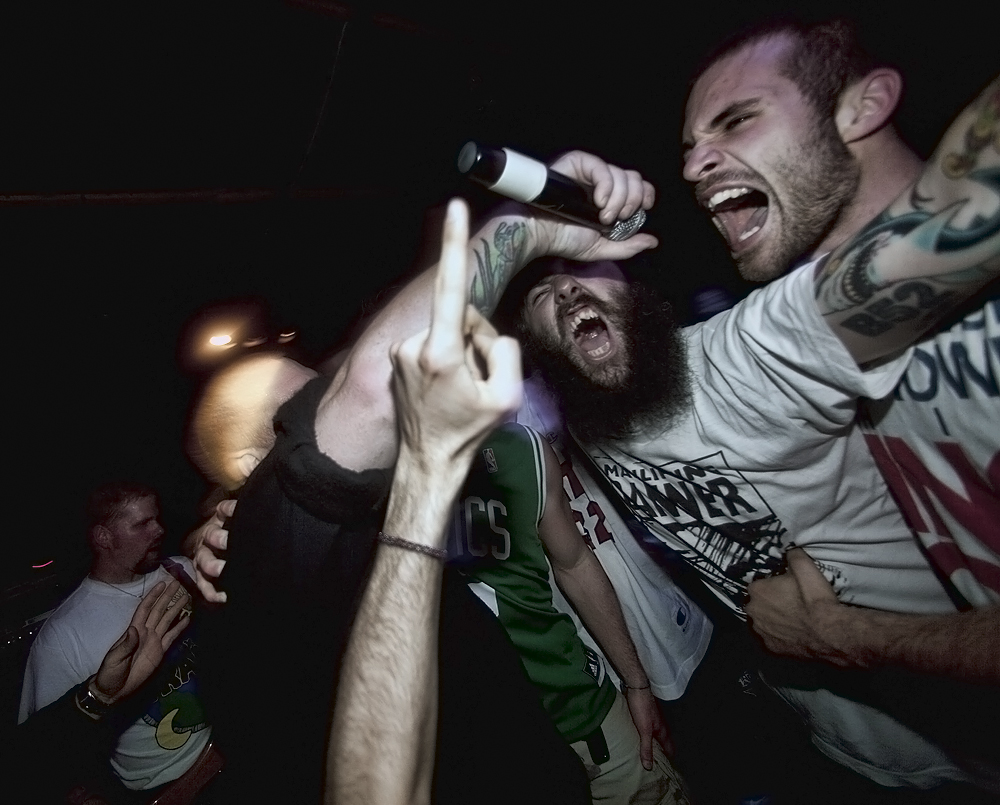