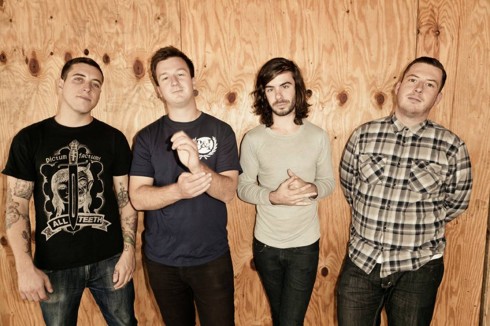 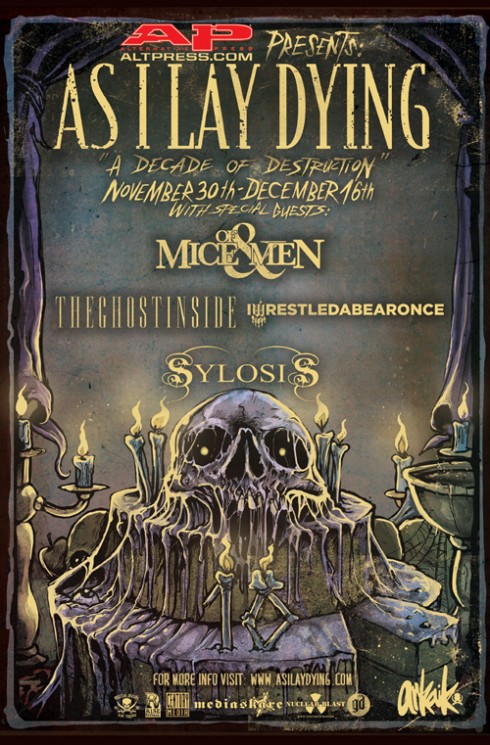 Southern California’s Of Mice & Men wrapped their month-long headline stint on the Monster Energy Outbreak Tour last and are now set to begin their jaunt as main support on As I Lay Dying’s A Decade of Destruction Tour tonight in Long Island, NY, along with The Ghost Inside, iwrestledabearonce and Sylosis. The trek winds down December 17 in Las Vegas, NV. Regretfully, bassist/vocalist Shayley Bourget will not be joining his band mates on the A Decade of Destruction Tour due to illness. Joel Piper (solo artist/Confide) will be stepping in as a replacement on this run. Of Mice & Men front man Austin Carlile explains, “Unfortunately Shayley will be unable to perform with us on our upcoming tour with As I Lay Dying, but we are very excited to announce that our good friend, solo artist Joel Piper, will be filling in for Shayley on bass guitar and vocals for the remainder of 2011.” Of Mice & Men’s latest release, ‘The Flood’, is out now on Rise Records. A Decade of Destruction Tour:
Nov 30 Long Island, NY (US) @ The Paramount Theater
Dec 1 Philadelphia, PA (US) @ Trocadero Theatre/The Balcony
Dec 2 Sayreville, NJ (US) @ Starland Ballroom
Dec 3 Worcester, MA (US) @ The Palladium
Dec 4 Washington, DC (US) @ 9:30 Club
Dec 5 Nashville, TN (US) @ Rocketown
Dec 6 Chicago, IL (US) @ House of Blues Chicago
Dec 7 Minneapolis, MN (US) @ First Avenue
Dec 8 Kansas City, MO (US) @ Beaumont Club
Dec 9 Dallas, TX (US) @ The Door Buy Tickets
Dec 10 San Antonio, TX (US) @ The White Rabbit
Dec 11 Lubbock, TX (US) @ Lonestar Amphitheater
Dec 13 Albuquerque, NM (US) @ Sunshine Theater
Dec 14 Scottsdale, AZ (US) @ Venue Of Scottsdale
Dec 15 San Luis Obispo, CA (US) @ SLO Brew
Dec 16 San Diego, CA (US) @ SOMA
Dec 17 Las Vegas, NV (US) @ House of Blues Las Vegas 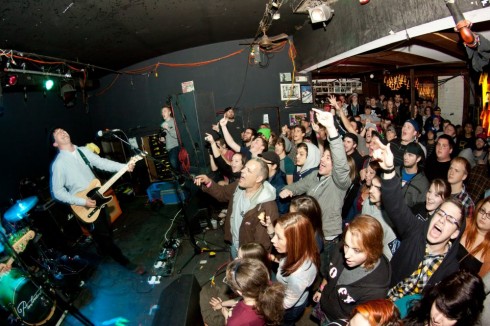 Pentimento will be holed up at GCR Studios in Buffalo, NY for three days starting this Saturday, as they begin recording songs with engineer Jay Zubricky (Kid Gorgeous, Every Time I Die) for an upcoming split EP with Young English which will be released by Panic Records in early 2012. Among the four songs the band will be contributing is a cover of Dashboard Confessional’s ‘The Places You Have Come To Fear The Most’ and three originals (see track listing below.) Pentimento will be posting a series of three studio update videos with Taylor Rambo Photography exclusively on www.Absolutepunk.net. Keep checking the site for the clips!
1) L’esprit de escalier (The Stairs)
2) No Apology
3) To The Bridge:
4) The Places You Have Come To Fear The Most (Dashboard Confessional Cover)
www.pentimentony.blogspot.com
www.panicrecords.net 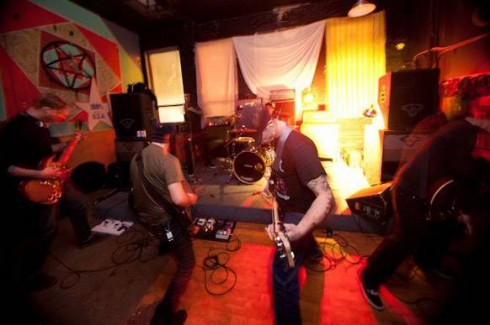 Seattle, WA’s Panic Records has signed Breag Naofa. The Seattle based band (which features members of Trial and Love Is Red) will release its self-titled LP on Valentines Day 2012. Breag Naofa (Old Irish Gaelic name pronounced Bray-G Nay-Fuh) which simply means “holy lie”, was formed of a core of six members who’s socio/political ideas all differ slightly. The common thread throughout Breag Naofa’s ideology is that religion still poisons every aspect of the human experience. Set lyrically in a narrative style, Breag Naofa uses both lyrics and their music as a vehicle to convey this mutual feeling of disgust, despair, and disillusionment with the effects that belief and reliance in the “supernatural” has had upon human existence from past to present. On their debut self titled LP, Breag Naofa brings on a sound that is of the slow, crushing, heavy repetitive nature while adding layers of ambience to almost give you the feeling of being “lost” along with them in the music. Breag Naofa will surprise you with heavy crushing riffs that start out like a slow locomotive to full force driving “d-beat” style riffs and rhythms. Creating enough anxiety to then calmly bring you back down into yet another ambient wave of music that continues to still hit hard while at the same time hypnotize. Following in the footsteps of other primogenitor artists such as CULT OF LUNA, FALL OF EFRAFA and ISIS, Breag Naofa want to further extend the boundaries that their music can take them and evolve with the music and the message. Check out this new song titled ‘IV’ at http://www.facebook.com/BreagNaofa to get a taste of what these guys have to offer to the Post Metal world.

Daylight To Release The Difference In Good And Bad Dreams 7” EP January 3rd Via Run For Cover Records Video For “Damp” Premiering on Altpress.com Label Launches Pre-Order for EP and 3 New Tees at http://www.runforcoverrecords.com/store 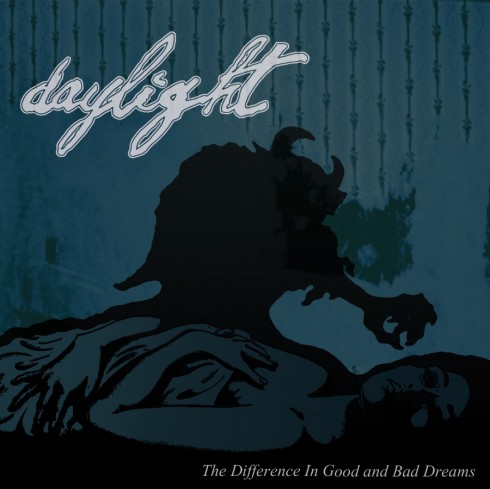 Doylestown PA’s DAYLIGHT will release ‘The Difference In Good And Bad Dreams’ EP January 3 via Run For Cover Records. A music video for the track ‘Damp’ is premiering exclusively on Altpress.com and can be viewed at: http://www.altpress.com/aptv/video/premiere_daylight_damp. Run For Cover has launched a pre order for the EP and 3 new tees. ‘The Difference In Good And Bad Dreams’ is Daylight’s third proper EP in as many years and a precursor building up to next year’s much anticipated debut full-length. These four new songs mark the Doylestown, PA quintet’s most focused and diverse record yet. Twinkling leads and Cobain-esque vocal dynamics add space and dimension atop of walls of grungy gained-out guitars. The tempo of the music harkens to brooding, patient mid-90s post-hardcore a la Fugazi or Quicksand, lending to a desperate undercurrent running beneath the songs. The thick rhythm section and spacious, huge drum parts are perfectly written to support some of the bands catchiest and biggest vocal hooks to date. Daylight’s signature unrelenting lyrical depression continues yet with a more melodic and dynamic vocal approach, complimenting the band’s musical progression. With this EP, the band has effectively carved out it’s own notch in the contemporary punk movement, paving the way for a breathtaking debut LP in 2012
Tracklist:
1. On The Way To Dad’s
2. Hungry At A Funeral
3. Damp
4. In My Dreams
Upcoming shows:
Sat, Dec 3 – Philadelphia, PA- Broad St Ministry w/ Touche Amore, Seahaven
Sat, Dec 10- Ashtabula, OH- West End 2153 w/ Tigers Jaw, Mixtape
www.runforcoverrecords.com 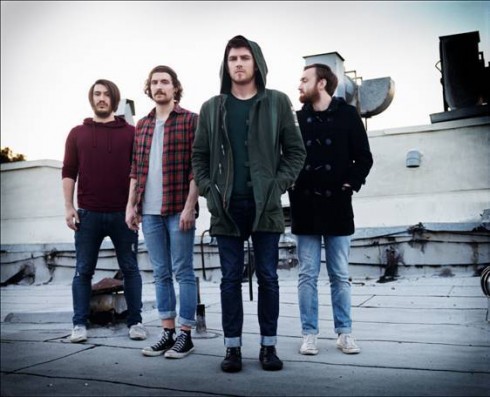 Glasgow’s TWIN ATLANTIC, who just wrapped up their SOLD OUT U.S. tour as support for AWOLNATION and Middle Class Rut, have announced the launch of a groundbreaking new promotion in partnership with popular photo social networking site Instagram. The Twin Atlantic ‘Instagram Project’ will be launched on December 2nd and is the first of its kind. The project will pull in fans’ Instagram uploads tagged with the hashtag #freetwinatlantic and pull them all into their own grid allowing fans to interact with their own photo socially and share it with friends via Email, Facebook walls and Twitter. But that’s not all… once enough fans have done it, exclusive content will be unlocked, like a FREE download of the Hadouken! remix of the song ‘Make A Beast Of Myself’, very special acoustic videos and a few surprises too, meaning fans of the band can get their mitts on some great goodies! As the fans’ pictures continue to grow, the photos will be pulled into a mosaic image of the ‘Make A Beast Of Myself’ single cover of the Virgin Mary and made into a lithograph composed of all the fans’ images. This very special litho will be available for presale during the promotion. Twin Atlantic’s critically-lauded debut full-length, ‘FREE’, was recorded at Red Bull Studios in Santa Monica, CA with legendary producer Gil Norton (Foo Fighters, Pixies, Jimmy Eat World). Free, the follow up to the well-received debut EP, ‘Vivarium’, expands upon the band’s signature sound, melding angular riffs with energetic choruses. Explosive and hard charging, yet melodic and thoughtful, the tracks cut deep and ring true to the listener, leaving a lasting impression. The video for the title track and current U.S. single ‘Free’ was directed by Howard Greenhalgh (Soundgarden’s ‘Black Hole Sun’) and can be viewed here: 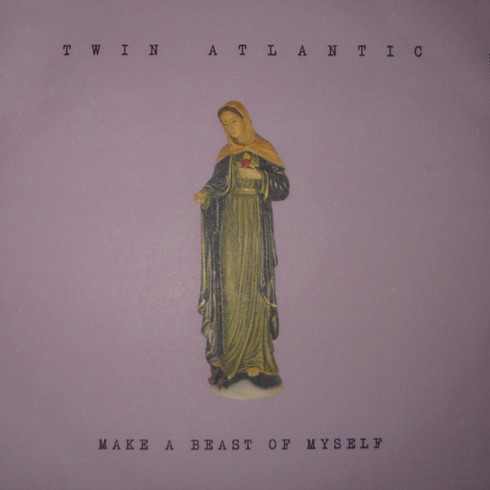 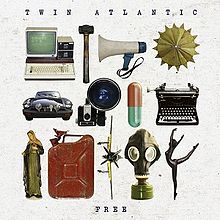 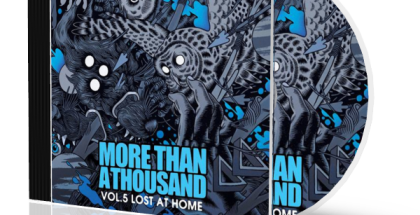 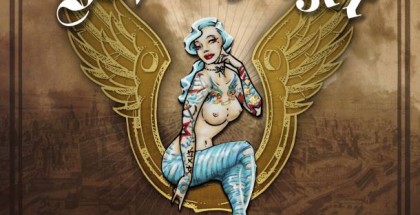 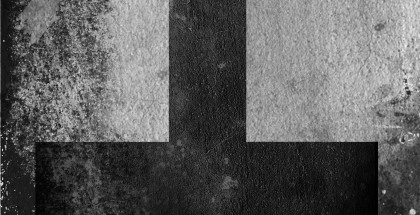 SECONDO SINGOLO PER I LIKE ALLIE September 21, 2021 | Salad Days 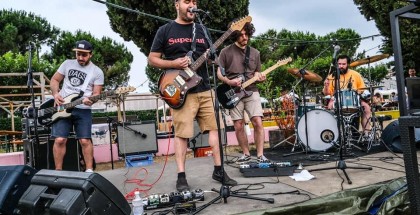