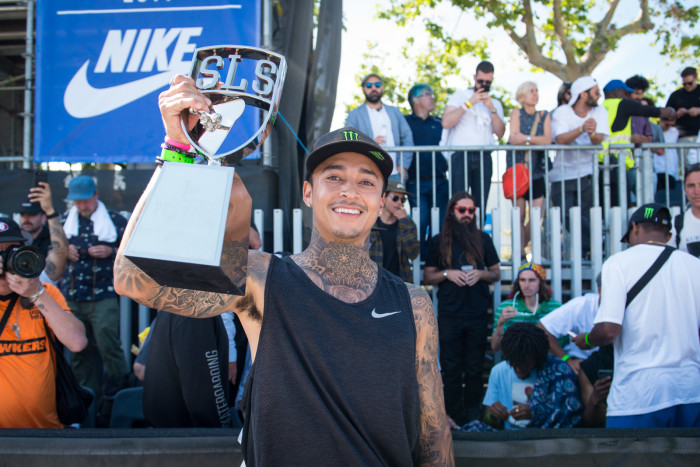 Barcelona, Spain. What a way to start the season! The third international SLS Nike SB Pro Open in Barcelona had it all:

Nine Club scores, newly minted SLS pros, and a head-to-head rivalry down to last attempts. When all was said and done, Monster Energy’s Nyjah Huston took 1st place with a dominant performance against over 50 of the world’s best street skateboarders. In front of a high-energy crowd at Skate Agora BDN plaza and viewers in 92 countries watching via live stream on ETN, the 22-year-old from Huntington Beach, California, won the contest for the second time and secured a Golden Ticket to the SLS Nike SB Super Crown World Championship in September. 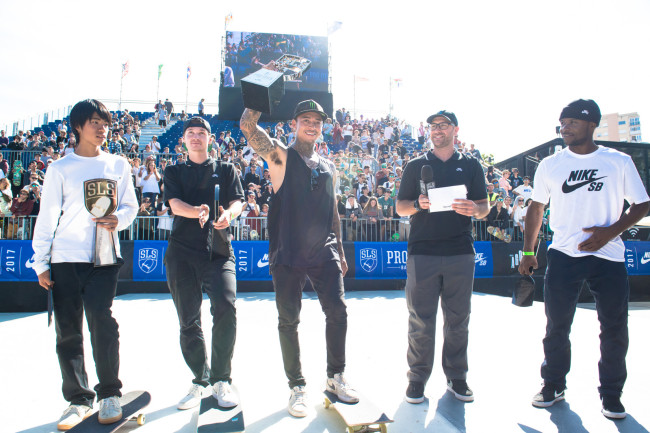 Now in its third year, the Barcelona Pro Open serves as the official international qualifier for the 2017 Street League Skateboarding Nike SB World Tour. Competitors from 12 countries battled it out on the California Skateparks-designed Skate Agora BDN course – available to local skaters year-round as a permanent SLS Certified Skate Plaza – for high stakes: The two highest-ranking non-SLS pros earned a spot on the tour, while SLS Pros took their best shots at earning Championship Points and a Golden Ticket to the finals in LA. 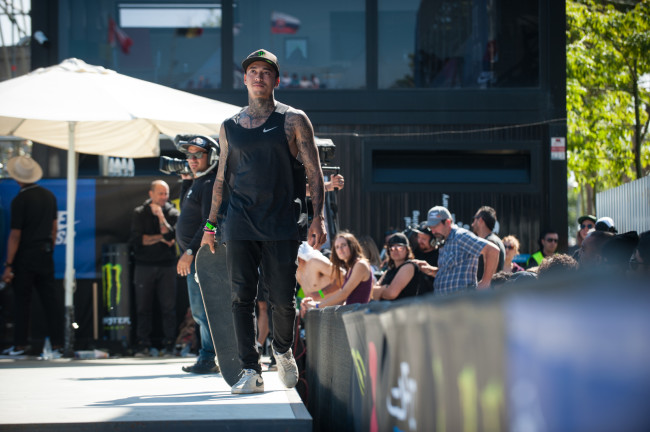 Coming in hot off last weekend’s win at the Red Bull Hart Lines contest in Detroit, Huston coasted through the Semi Finals with two flawless runs, facing heat from last year’s Pro Open winner, Shane O’Neill, and Brazil’s Felipe Gustavo. The competition kicked into high gear in the finals, with O’Neill posting the weekend’s first Nine Club score – the judges set a high benchmark for scores above 9 points – on a technical switch bigspin flip to frontside boardslide down the rail. Huston needed to dig deep into his bag of tricks and respond strategically, as the two revisited last year’s head-to-head rivalry. 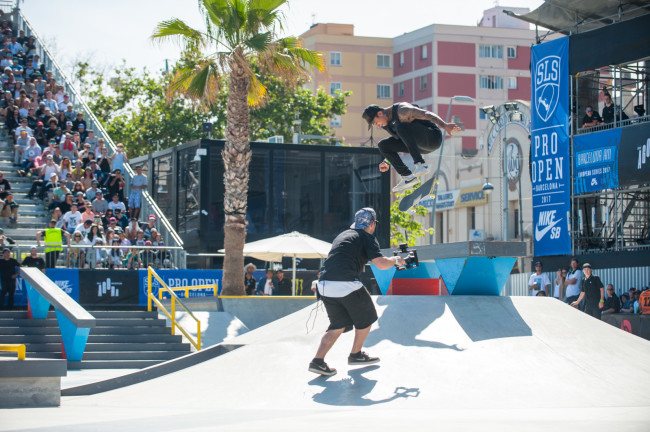 Having already won the Barcelona Pro Open in 2015, Huston laid the foundation for his winning score with two perfect runs at 8.7-points each, including highlights like backside 5-0 and nosegrind on the planter rail, backside 360 kickflip over the bank-to-bank, kickflip backside disaster on the quarterpipe, backside 180 nosegrind to pop out forward on the volcano bench, and fakie overcrook 5-0 and kickflip backside lipslide down the rail. 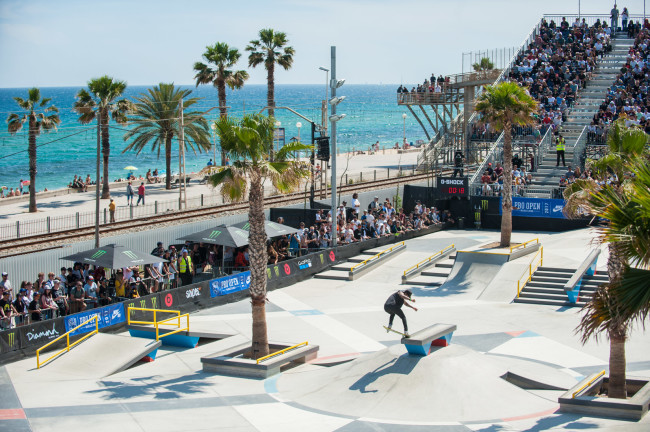 When the action moved into Best Trick attempts, Huston and O’Neill emerged as the only two skaters with a chance to win the contest. Ultimately, Huston had the last word after landing a gap kickflip to frontside smith grind on the bank-to-bank rail and huge fakie kickflip traveling blindside over the volcano bench for a 35.00-point overall score – and the win. 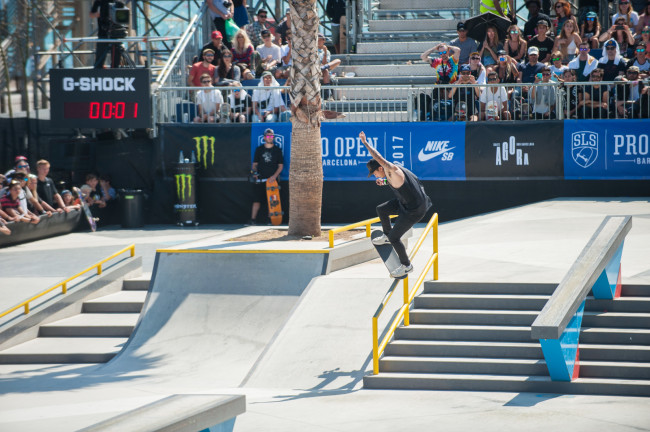 “Winning felt great, it was a very close contest as always. I thought Shane was going to win on that last trick. I feel really strong and healthy this year and my body is doing good – so let’s keep it going,” said Huston upon winning first place, while hinting at currently filming a video part for his shoe sponsor, Nike SB. 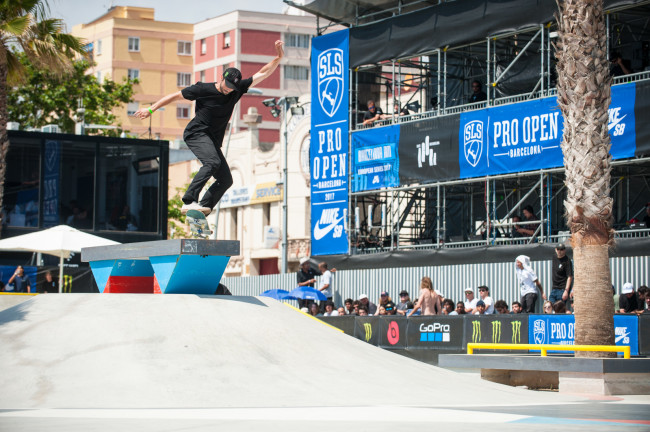 Also making the finals in Barcelona today, Huston’s teammate Matt Berger was back from an injury-related hiatus in his first SLS performance since 2015. Matt’s highly technical standouts included frontside 180 to switch backside 50-50 on the volcano bench, backside 180 to switch smith grind (also called Bennett grind) down the Hubba, as well as bigspin to backside lipslide, bigspin to frontside bluntslide fakie, and bigspin kickflip to frontside boardslide fakie down the rail. 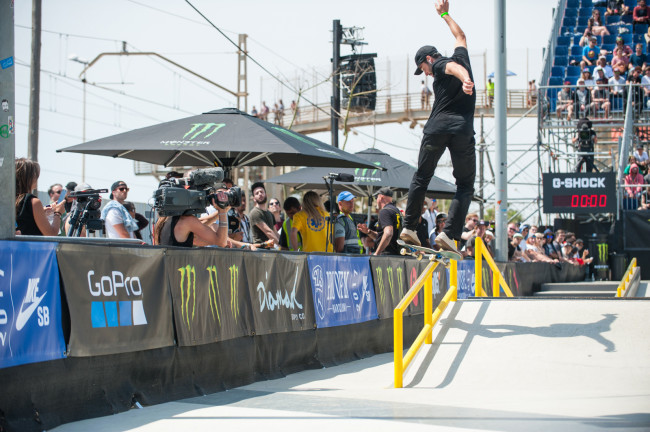 “I’ve been feeling good on my board, but coming into skating a contest is an entirely different experience. Once I started skating and getting into the vibe, I was having a good time today,” said Berger, adding: “Plus, the city of Barcelona is like a skate park, you just skate around the streets and hit perfect spots.” 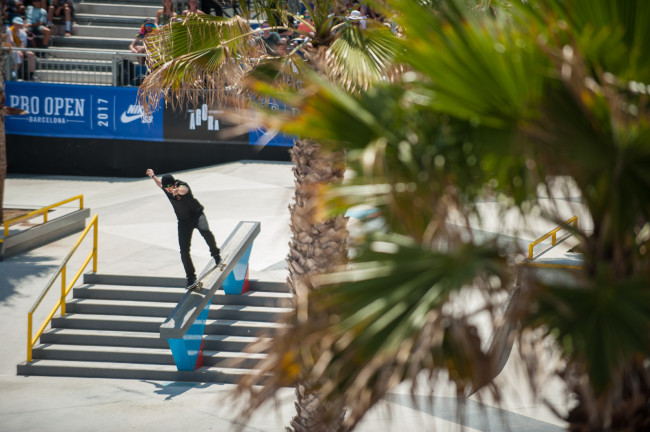 Skating strong in the Semi Finals, Monster Energy’s Chris Cole stoked the crowd with a technical frontside bluntslide to backward nosegrind on the ledge and a huge backside kickflip over the volcano. His teammate Ishod Wair pulled a frontside kickflip to lipslide and backside overcrook down the rail, while 2016 Thrasher Skater of the Year Kyle Walker landed a backside 180 to nosegrind and backside smith grind revert down the hubba. European Monster rider Marek Zaprazny from the Slovak Republic made a strong showing in the Semis with nollie heelflip over the bank-to-bank, kickflip backside nosegrind on the flat ledge, and switch backside tailslide on the volcano bench. 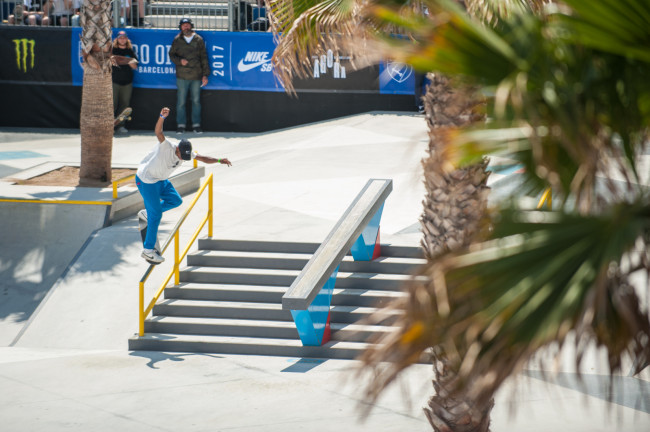 Two new pros skated their way into Street League this weekend, emerging from a field of 30 non-SLS pros: Dashawn Jordan from Chandler, Arizona, and Yuto Horigome from Tokyo, Japan, who took 3rd place with a fresh blend of light-footed technical skating. They are joining David Bachinsky and Louie Lopez, who already earned their spots in March at the official SLS North American Qualifier, Tampa Pro presented by Monster Energy. Aside from winning the Golden Ticket for the SLS Nike SB Super Crown World Championship, Huston also currently tops the SLS leader board with 177 Championship Points. 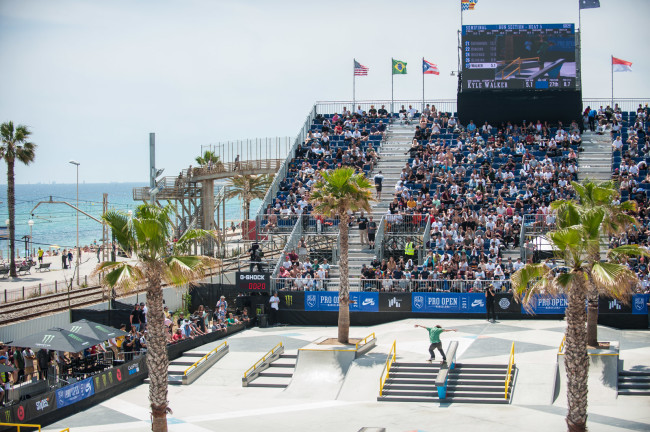 Now that a weekend of hammers and world-class skating in Barcelona is a wrap, the pros already set their sights on the first stop of the 2017 SLS Nike SB World Tour at legendary Olympic Park in Munich, Germany, on June 24. Will Huston maintain his winning performance and reclaim the title this season? Stay tuned! 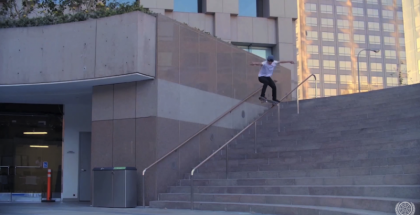 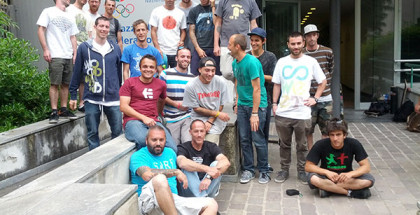 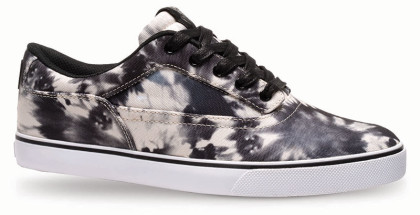 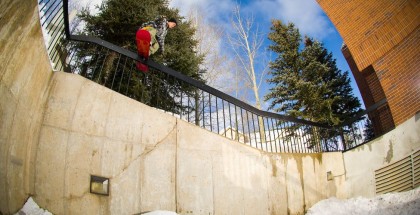