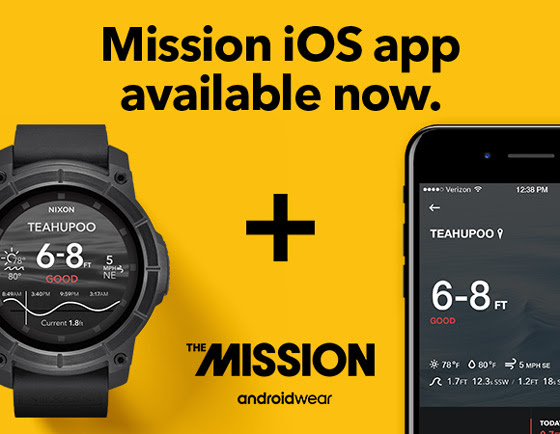 Released in October 2016, The Mission is powered by Android Wear™ 2.0, Google’s latest smartwatch platform, and has an ultra-rugged and water-resistant design so individuals can enjoy The Mission’s technology and their favorite apps where their time is most often spent—riding in the water, on the mountain and beyond. Nixon’s custom Mission app allows users to set their preferred surf and snow conditions on the companion app. When favored conditions hit, the Mission app provides users with a “Shred Alert” giving them real-time surf and snow conditions at the glance of a wrist. The iOS app will provide iPhone users with the complete Mission experience and other upgraded functionalities. The Mission iOS app is available for download on the Apple Store.

The iOS app will provide iPhone users with the brand’s real-time “Shred Alerts” feature powered by Surfline and Snocountry. The app release will also allow iPhone users to set the tide indicator as a sub-dial and to use the detailed tide graph and snow forecast in the Mission Pro face. The Mission was recently updated with Android Wear 2.0. As part of the next update to Google’s wearables operating system, the upgrade brought improvements to user interface, standalone app support, and enhancements to existing smartwatch functionalities to both AndroidTM and iPhone users. The Android Wear 2.0 software update provided Mission users with:

Standalone apps with the ability to download apps straight to The Mission from the on-watch Google PlayTM store
Enhanced messaging and fitness apps, including Google Fit notifications
The Google Assistant built-in, triggered by holding down the power button
Customizable watch faces and subdials give users the freedom to choose what they would like to see on the dial. If a user activates a custom sub-dial, information is pulled from their favorite apps, including the Mission app.
Ambient mode for chronograph and timer functions
New color combinations of Nixon’s Sentry, Unit and Ranger watch faces 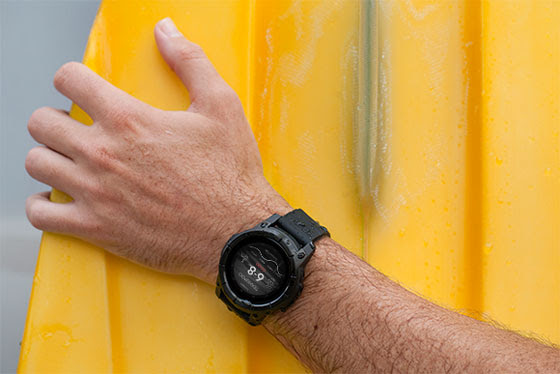 Voted upon by a group of surf industry peers, and a top list of retailers, the Mission was awarded Accessory Product of the Year from SIMA, The Surf Industry Manufacturers Association, last week. The Missions design language and functionality were inspired by Nixon‘s action sports DNA and that is what sets the Mission apart from any other smartwatch you’ve come to know. To remain up to date on latest features, opt into Mission updates at Nixon.com/smart

About Nixon
Founded in 1998 in Encinitas, California, Nixon is a premium, global watch and accessories brand. Nixon’s team-designed, custom-built watches and accessories are sold in the best boardsport, fashion and specialty retailers in over 90 countries around the world. For more information, please visit: Nixon.com

Plugs Of Apocalypse ‘Deeper Than Hell’ 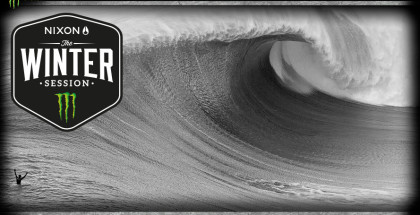 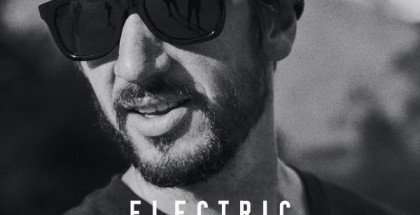