Similar to Kona, Stone Edge is another one of Florida’s legendary skateparks possessing plenty of memories from the golden age of skateboarding. Wandering around the park’s shop, we were confronted with interesting artifacts at every turn. One of the highlights were all the old admission forms neatly tucked neatly under the counter’s glass. Tony Hawk, Gershon Mosely, and everyone in between seemed to be represented. 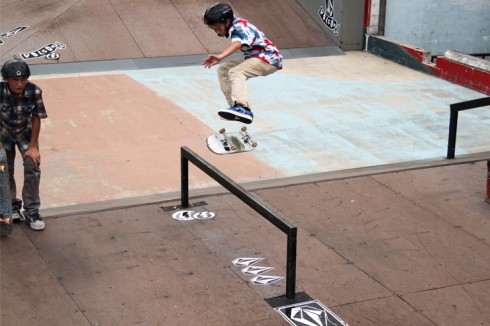 The 14 & Under division gave the judges plenty to think about – here’s a kickflip f/s boardslide in zone 2
Having been around since the late 70′s, the park has some serious local cred and the men behind the magic are continually putting in the extra time to reinvent obstacles and entire sections.

Tricks like this 360 shuvit had Kevin Sikes on point from starting horn to final buzzer
Speaking of men behind magic, the park is owned by the Kona crew out of Jacksonville, FL. While most folks may be more immediately familiar with the one known as Martin Ramos, Ricky Burns has his hands buried beyond the elbow in Stone Edge on a day-to-day basis. 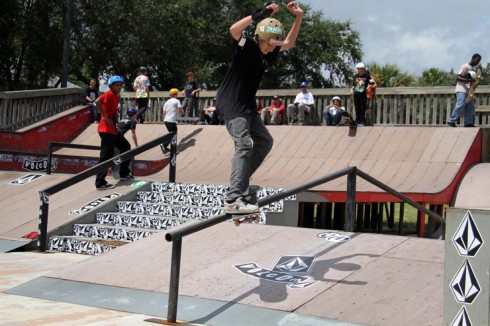 Grinding in frontside feeble fashion on the A-frame in zone 1
After a brisk registration full of handshakes and high-tens with old friends, we were set to get the WITP started. Following a quick discussion with some locals, we decided the WITP areas would consist of an “A” frame rail, ledge and bump in zone 1, a 6-set, down-rail and flat-bar in zone 2 and a “bicycle” rail, hip and ledge in zone 3! 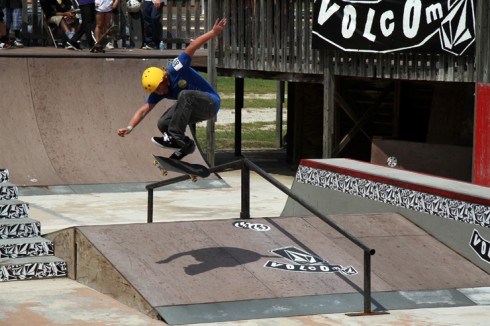 Jamie Foy was turning heads all day! Here he’s in the midst of stomping a hardflip to flat
The day got off to a quick start thanks to an unusually talented and fast-skating 14 & Under division! 90-plus temperatures mixed with some standard Florida humidity weren’t enough to faze these guys. 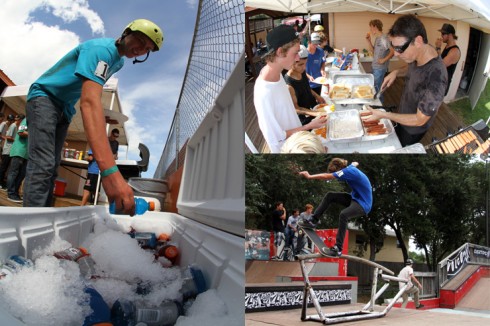 Thanks to Gatorade and Volcom’s Todd Causey for making the barbecue extra delicious. Kanaan Dern kept busy by hammering out this nose bluntslide
No one in the 14 & Under division, especially Blaine Partridge, Jesse Alderman and Dakota Hunt had any intention of placing 2nd. With their winning intentions made clear, all that was needed was the deliverance of heavy tricks. Thankfully these came fast and furious and had all three judges shaking their heads in disbelief!

Nollie heeflip to fakie in zone 2
With energy levels dwindling, the 14 & Under group emptied their tanks and pulled out all the stops in search of victory. After the scores were tallied and then double-checked, Jesse Alderman stood proudly atop the podium while Blain Partridge and Dakota Hunt checked in a close 2nd and 3rd respectively! 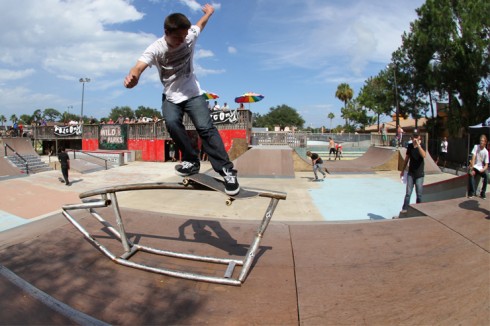 Our old comrade Alex Pellegrino was in the house and making some noise – b/s smith grind
The 15 & Over division was up next and wasted no time getting into it. Both heats were peppered with Jacksonville talent and looked right at home. Gio Gerogallis and Jamal Campbell led the charge and got everyone pumped up. Jake Miller commuted from the Atlanta area and did a great job giving his Florida counterparts a run for their money! 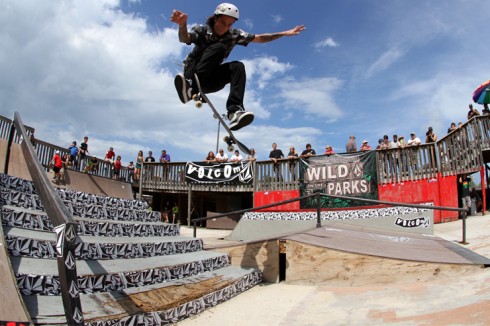 Nick Blanco floating a lofty 360 flip down the 6-set in zone 2
Our old buddies Jamie Foy, Ish Cepeda and Kevin Sikes were also in attendance and in search of victory. After all was said and skated, Kevin Sikes hung on to take 1st, Jamal Campbell earned 2nd and Jamie Foy destroyed everyone in his path en route to 3rd! 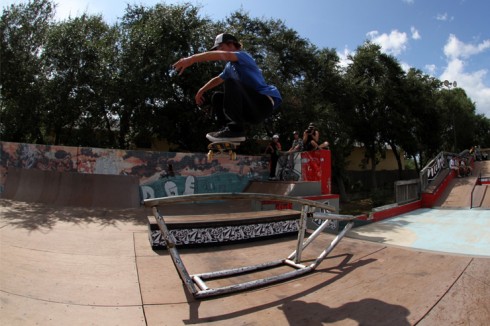 Marshall Lafrance getting himself a large f/s 180 over the motorcycle rail in zone 3
The Open/Pro-Am division was the last to skate and added a well-earned exclamation mark on the day’s WITP mayhem! With invites to this year’s $25,000 WITP Championships (Sat Oct 15, Austin TX) up for grabs, there was more than enough motivation to be had!

Jamal Campbell impressing the crowd with this switch 270 frontside boardslide to regs in zone 1
Heavy tricks went down in all three zones as the Pro-Am group battled it out until the final second! Even a little rain wasn’t enough to deter these guys, as it was clear they would’ve skated through a hurricane! After all the numbers were crunched, Kyle Chambers locked down 1st, Marshall LaFrance skated into 2nd and Connor Askew claimed 3rd!

Thanks to Ricky Burns, Martin Ramos, John, Josh and everyone else at the park for their WITP support. All the hard work those guys put into the park as well as skateboarding itself is duly noted and greatly appreciated! Thanks also to Aaron “Mullen” Mulligan, Mike “Darkness” Barnes and Duddy for judging as well as Volcom’s own Todd Causey for supporting the scene from start to finish! Lastly but not leastly, thanks to our WITP tour sponsors for helping us grease the winners with prizes!
Results:
14 & Under:
1st: Jesse Alderman
2nd: Blaine Partridge
3rd: Dakota Hunt
4th: Santino Johnson
5th: Gino Perez
6th: Chris Roque
7th: Ryan Hodges 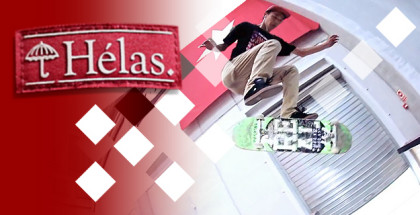 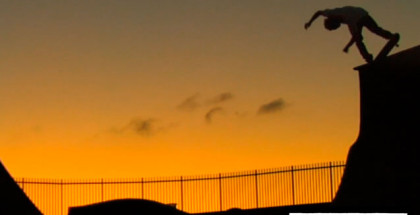